Writer Sabby Robinson takes us inside an emotional performance at First Avenue on 2/19/20 in honor of the late St. Paul rapper Lexii Alijai.

“This girl was telling stories that take me as a 24-year-old woman to now comprehend and understand,” recalled platinum R&B artist Kehlani at First Avenue on Wednesday night as she remembered the first time she heard the late artist Lexii Alijai’s music. “I’m listening like, thank you for the advice! Thank you for getting me through it. I needed this!”

Oakland-native Kehlani and Twin Cities artists performed at a benefit concert at First Avenue on Wednesday night to honor and remember the native St. Paul musician Alijai after she passed away last month on January 1. Proceeds from the show will go towards a scholarship created by Lexii Alijai’s family to support young local musicians.

The emotional show began with brief but heartfelt performances by several of Alijai’s family members and friends, including local DJ K Reeves and rapper Kaycyy. Minneapolis rapper Reeves Junya took the stage to bring awareness to the issue of mental health, performing his single “fake happy” and crooning to the crowd “I could use some mental health… I could use some medicine.”

The music community in the Twin Cities and beyond was rocked after the talented young musician Alijai died of a drug overdose in a St. Paul hotel room. Born Alexis Alijai Lynch, Alijai’s self-reflective lyrics and clean bars were heavily inspired by the artist J Cole. The young artist garnered attention online after rapping over popular songs like Drake’s “Girls Love Beyonce.” After hearing her covers, Kehlani featured her on the track “Jealous,” which was nominated for a Grammy along with Kehlani’s first mixtape You Should Be Here. Wednesday would have been Alijai’s 22nd birthday. 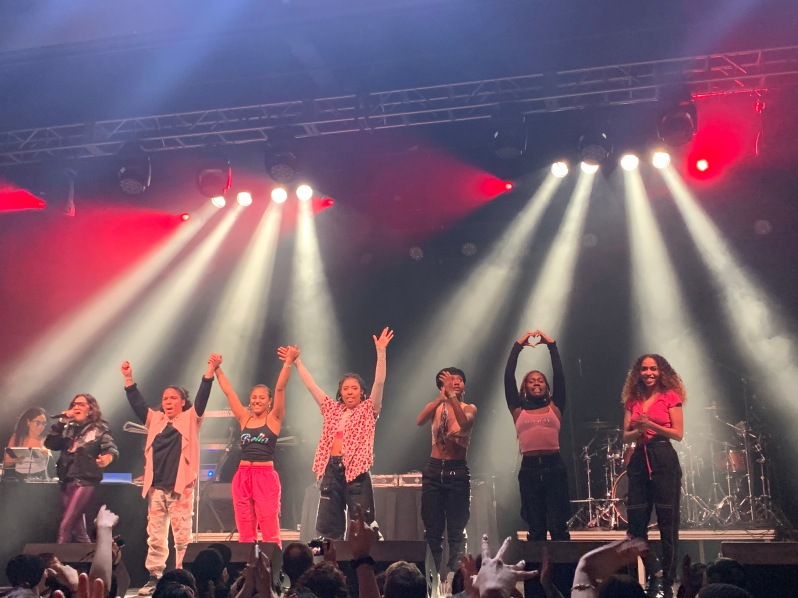 Local artist Sophia Eris kept the crowd alive and ready for headliner Kehlani with a DJ set, mixing classic rap tunes like Drake’s “Legend” and “A Milli” by Lil Wayne seamlessly with Alijai’s songs (many from her latest mixtape Growing Pains). Eris, who is also the long-time best friend of popstar Lizzo, told the crowd tearfully that “there was a reason” she was wearing huge reflective sunglasses inside. Following Eris, the Twin Cities dance group NewBlackCity, made up of young POC performers, sizzled on stage with a five minute hip hop dance routine.

Then a huge screen came down, covering the entire stage. Black and white photos of Alijai with her friends mixed in with videos of her singing and performing were shown, as well as an interview with Kehlani talking about how she first discovered the young rapper.

Kehlani kicked her performance off with “Footsteps,” a song from her latest album released last year called While We Wait. “These songs are old!” she said as she blushed at the crowd, warning them that she may forget the lyrics. The musician hasn’t performed in a year and a half, after having a baby girl last year (one of the most touching moments of the event was when an audience member handed her a pink t-shirt with a photo of her and Alijai for her baby to wear). Kehlani’s hiatus didn’t matter though — her silky, melodic voice captured the audience so heavily that many didn’t even seem to notice when she sang her ballad “Honey” backwards.

Although the crowd knew many of the words to Alijai’s songs, it was evident that many were there for Kehlani. The packed venue yelled the lyrics to even her latest songs in unison! The Grammy nominated artist, backed up by her best friend and long-time DJ Noodles, largely played crowd-pleasers like “Gangster,” with the audience reaching to try to hit the impressive high notes at the end of the single with her. The venue rocked and audience members turned to those around them to groove to the popular song “Crazy.” When it was time for Chance the Rapper’s verse in her hit single “The Way,” she even turned the mic to the crowd to sing it, looking impressed that many sang every word.

Of course, the performance wouldn’t have been complete without “Jealous,” the track that Kehlani and Alijai first collaborated on. “To this day I really think it’s my favorite feature of all time, no bulls**t. I don’t think she missed a bar…. I’m just happy that I have this song and this verse to carry with me forever,” said Kehlani. Again, the audience carried her through the song and belted every word.

The R&B singer closed out the night by asking the audience to join her in singing “Happy Birthday” to Alijai. Although Kehlani is also going on tour with mega-star Justin Bieber this summer, the only mention of her upcoming performances was when she admitted that more intimate venues like First Ave were “much less scary” than performing in larger spaces. Instead, she encouraged people to keep listening to Alijai’s music. “Send it out, tweet it, text it, play it in your car, play it at a party… it’s up to us to keep this sh*t alive forever!”

Sabby Robinson is a fellow with the investigative documentary team at American Public Media, APM Reports, and largely reports on education news. A proud Oakland native, you’ll most likely find Sabby traveling and listening to R&B music or a podcast.