I’m back this week to talk about eight more albums and EP’s that I’ve loved from this year, in Part 3 of my Gems of 2019. This time, we’re talking about time travel, multi-media works, a stand against the music industry, and more. (Because I’m home for the holidays, there is no podcast episode to accompany Part 3, but you can read about all of these releases below). And keep your eyes out for the final installment of my Gems, Part 4, coming next week! 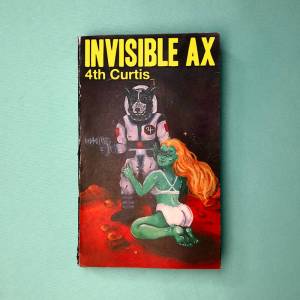 4th Curtis’ Invisible Ax is a dizzying trip that soars from ancient Egypt to the 21st century and into the murky stratosphere of the Internet. The EP is the sophomore release from the self-described Minnesotan “all trans band.” In just five songs, 4th Curtis revive some of history’s most storied names and use the likes of Julius Caesar, Marie Antoinette, and Cleopatra as the backdrop to explore sexuality, identity, and power. As always, 4th Curtis deliver their piercing lyrics with a wink and a nod, using Internet references and memes to tell complicated stories.

Stella Donnelly — Beware of the Dogs

Stella Donnelly isn’t afraid to talk politics, whether it’s bickering over a Christmas dinner with conservative relatives, outing entitled and abusive men, or hounding her boss for missing a paycheck. The Perth-based singer-songwriter uses sharp details to paint a revealing portrait of Australia. In “Tricks,” Donnelly describes a Southern Cross tattoo, a symbol with a colonialist history and ties to white nationalism, in the same breath that she rolls her eyes at a controlling partner. But Donnelly manages to maintain a cheery tone throughout Beware of the Dogs, using her wry humor to poke fun at — and poke some holes in — her country’s views.

Solange — When I Get Home

Solange surprised us all with her fourth album, When I Get Home, in more ways than one. Unannounced, Solange dropped the album in March, along with an accompanying film that she directed and edited herself. When I Get Home is undoubtedly an ode to the artist’s roots in Houston. In the film, black cowboys ride down Texas streets, and Solange arranged a number of surprise screenings throughout her childhood neighborhood. But the album isn’t just an ode to Houston — it’s a free-flowing expression of Solange’s artistry. She creates entire songs out of short, repeated phrases, a lyrical minimalism that she juxtaposes with a flurry of samples, textures, and inspirations. In her own words, “I can’t be a singular expression of myself. There’s too many parts, too many spaces, too many manifestations.”

After discovering Crumb’s swirly psych-rock-meets-modern-jazz on their 2017 EP Locket, I was hooked — and lucky for me, the Brooklyn band released their first full-length, Jinx this year. Crumb’s music flows through trance-like chord changes and kaleidoscopic synth hooks. Their tremolo-soaked guitars and dreamy melodies evoke a ‘60s nostalgia, but Crumb’s music is made for a burnt out, overstimulated, post-Internet generation. Listening to Jinx is like sipping on a steamy bowl of nourishing soup after surviving for 48 hours on nothing but anxiety, hot cheetos, and “lofi hip-hop beats to study/relax to.”

Heavy Banding is the latest album from PA husband-and-wife duo Carly Comando and Tom Patterson. The duo are air-tight, with Patterson holding down drums and Comando creating an earth-shattering wall of sound with just an electric keyboard and effects pedals. Heavy Banding explores relationships — not just romantic ones, but all kinds of family dynamics, from getting caught in an argument with relatives in “Villain” to Comando’s hope that her niece grows up “weird like [her].” The album’s standout track is the anthemic “Louder,” a fierce rallying cry in which Comando, along with backup vocals from members of Petal, Dikembe, and Expert Timing, asserts that she isn’t going to turn a blind eye to sexism or gatekeeping in the music industry, she’ll just keep getting louder.

Mannequin Pussy released one of the most talked-about albums of 2019, and I have a feeling it’s one that we’ll keep talking about well into the next decade. The Philadelphia band fronted by singer/guitarist Marisa Dabice crafted a duality of fiery rage and gentle vulnerability on their album Patience. Throughout its songs, Dabice releases demons that have held her back including abusive relationships and disparaging self-talk through the growled vocals and roaring guitars on tracks like “Cream” and “F.U.C.A.W.” But for as cathartic and explosive as Patience is, it is also equal parts fragile. Dabice breaks through her stony veneer by pleading, “Everyone says to me, Missy you’re so strong / But what if I don’t want to be?” in “Drunk II,” and in “Who You Are,” begins to peel back the rough exterior of painful memories to reveal something gentler, asking “Who taught you to hate the way you are?”

Summer Cannibals — Can’t Tell Me No

Can’t Tell Me No is the fourth album from the Portland, OR band Summer Cannibals, but in many ways the album is a fresh start. After escaping a manipulative relationship with a fellow musician and collaborator, bandleader Jessica Boudreaux scrapped an entire album that the two had written together. Within 24 hours, Boudreaux assembled the band in her home studio and got to writing a new album, filled with fresh and bitter emotions from the newly severed relationship. Can’t Tell Me No is decisive and cathartic; Boudreaux reclaims her voice through rumbling guitar riffs and hard-hitting lyrics. The album is the band’s first self-produced and self-engineered product — after the music industry refused to listen to Boudreaux’s experience, she took the album into her own hands. “My word’s not enough because power corrupts / and it’s his against mine,” she sings on “Innocent Man.” But throughout Can’t Tell Me No, Boudreaux shares her own story, in her own words.

Vagabon’s self-titled sophomore album is shimmering, malleable, and a complete departure from the bare-bones indie rock of musician’s debut album. Vagabon, a.k.a. Laeticia Tamko, explores a softer sound this time, opting for synthesizers and 808 drums instead of fuzzy guitars. In addition to the shift in sound, Tamko’s lyrics express a determined but gentle sense of change. Songs like “Water Me Down” and “Flood” evoke images of emotions pouring over and watering seeds to grow.